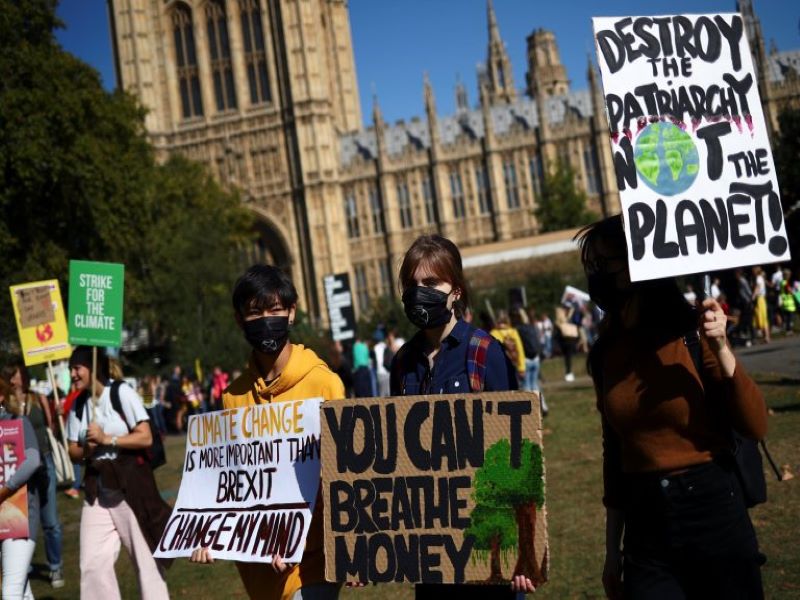 The global climate strike, where millions of people walked out of school or work will go down as a symbolic event. The strike was the biggest climate protest ever. Pictures from the day show there’s a growing movement of people united by the same demand. Governments need to do more to cut emissions to stabilise the climate. It’s unlikely strikes will have the desired effect in realising this demand. What the strikes do represent is a growing movement that could lead to a global revolution.

The climate crisis unites people behind a cause. Differences of race, culture, religion or politics become trivial in the face of the challenge we face as a global community. This is powerful. As the climate crisis develops climate strikes have the potential to galvanise a movement, with more and more people striking demanding action.

Governments are part of the problem, and can’t offer solutions. For the movement to be effective it must start to orientate around empowering people to catalyse change.

Governments won’t do more, because they can’t

We often think of the climate crisis as a problem. It’s not. It’s an effect of one. The problem is the belief systems driving our economy. The problem is growth and consumerism. These are beliefs leading to an undesired outcome. Changes to the climate.

These beliefs make up our current system. Government is part of this design. To solve the climate crisis involves changing the underlying way we do things. How can governments do this? They can’t.

Demanding governments solve the climate crisis is like asking a leopard to change its spots. They don’t have the will or power to create the necessary changes.

Governments are part of the current structure, they don’t control it. So why do people demand governments solve the problem?

This idea of democracy hasn’t been the case for some time because corporations have become too powerful. Corporations function outside of the democratic process. They make decisions for the good of shareholders. Not for the benefit of society.

Politicians are no longer bastions of power. Yes, they still have influence, but within limits.

Throughout history, systems change has come through revolution. The Russian Revolution is one such example.

For decades leading up to the fall of the Russian Empire political groups demanded a democratically elected government. The ruling Tsar opposed this outcome. And yet political groups used the pillars of power to seek reform.

If the Tsar gave into demands he would lose his power as absolute ruler. For a belief system functioning on the basis the Tsar was ordained by God, reform was never likely.

It was Russia’s involvement in World War I that exposed the intrinsic weaknesses of the autocratic system. Russian forces were no match for the Central Powers. Military defeats to the Central Powers left the Russian Empire weak, exposed, humiliated.

World War I proved to be a catalyst creating conditions leading to the fall of the Tsar. It was external forces that exposed intrinsic weaknesses in the Russian system. Political groups were able to take advantage of the circumstances to instigate a revolution and overthrow the Tsar.

The current situation shares many similarities. People are protesting, demanding changes to deal with the climate crisis.

What’s unique about the climate crises is it affects the whole of humanity. The climate strikes symbolise global unity. As the effects of the climate crisis worsen the movement will grow, and its unity will solidify.

The tipping point will occur when the climate crisis begins to overwhelm humanity. When governments aren’t able to deal with the effects of the climate crisis civil society will break down. People will lose trust in the current political structure, leading to a situation ripe for revolution.

Unlike previous systems refusing to change, what makes our current circumstance unique is change is certain. The climate crisis is changing the environment that supports life. We must adapt in line with these changes if we have any hope of dealing with the crisis.

Our current way of solving the crises isn’t working but what’s the alternative? What we’re lacking is a manifesto for change. That’s why the climate strike focused demands on government. Because currently, it’s the only structure people believe can create change.

What’s needed is a vision for change people can get behind. This is central to solving our current dilemma. Once people have a common vision for the future, the climate movement will stop demanding changes from governments.

The climate crisis is going to worsen with time. As it worsens momentum will build around change. A revolution is in the making. But will the movement that’s developing be ready to force through the changes necessary to deal with the climate crisis?

Why Do We Fear AI?

Because sentient AI could destroy humankind