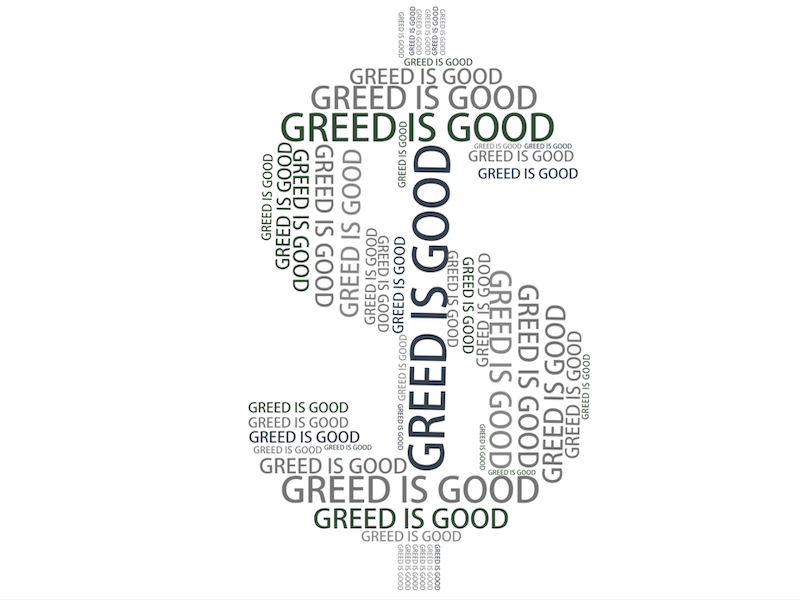 In 1986, Ivan Boesky made a speech at the University of California, proclaiming “greed is healthy.” When growing up, we’re all taught that being greedy is a less than desirable character trait. If that’s the case, what did Boesky mean when he said greed is healthy?

To understand, we need to consider one of the key fundamentals of the free market capitalist system we live in.

Adam Smith, the father of modern economics, argued that the pursuit of self-interest would, as if by an invisible hand, lead to the wellbeing of all. Underpinning the design of the market and the beliefs feeding it is this one sweeping assumption.

Self-interest underlies all motivations. We should make decisions that will benefit ourselves, and with it, our pockets. Doing so is not only to your benefit; it is to the benefit of all because it will lead to the wellbeing of all.

The issue with each person being self-interested is that inevitably there will be those who do better than others. Built into the market is the idea of ‘winners’ on the one hand, who successfully extract money from ‘losers’ on the other.

The aim of the game we’re all playing is to make as much money as possible. With that aim in mind, the characteristics that will give you a better chance of winning are self-interest and greed.

That’s what Boesky was referring to. Not that greed is a positive personality trait. But that greed is an essential quality if you want to succeed in a market that rewards greed and self-interest.

The power of self-interest

The problem with self-interest and greed being not only desirable but necessary qualities for success in the market is that if certain people win, they place themselves in a better position to keep on winning.

Because we’re all driven by self-interest, it makes sense for the winners to do whatever they can to protect their self-interest. Often, the winners, who have become rich and powerful because they are winning, can influence laws to make sure they never lose.

An example of this is within finance. Financial institutions can rig the system by placing pressure on politicians to create (or not create) laws in their favour. Where financial institutions make massive profits — for example, through credit cards — they make sure politicians don’t pass legislation that would protect people against predatory lending.

When times are good, they can do what they want within the confines of the rules they have helped create.

But if anything goes wrong, they have contrived the system to make sure governments will step in to protect them and support them in any way they can.

This is what happened in the 2008 financial crisis. Because financial services are so powerful and connected to every other part of the market, when things go wrong for them, they go wrong for everyone. And so governments have to pick up the pieces.

It’s a win-win for the financial companies and a lose-lose for everyone else. When things are going well, the financial services have manipulated the market to make sure they keep on winning, and the losers are people in society.

To add salt to the wounds, governments do nothing to control executive bonuses within these financial companies. The executives can reward themselves with whatever bonus they want, even when times are bad. During the 2008 financial crisis, bankers in the city of London (the home of banking and finance in the UK) were awarded over £13 billion in bonuses.

So bankers felt there was no problem paying themselves massive bonuses when they had created a situation resulting in society suffering.

For many, this behaviour is psychotic, yet, when looking through the lens of self-interest and greed, this behaviour makes sense. They are just playing the game the way they should play it.

The major issue here is that if those who win can influence laws and regulations to make sure they always win, then the same people always gain to the detriment of the same people who always lose.

The losers will still try their best to wring out as much money as possible from a tiny slice of the pie. But they can not prosper because the system is set up for them to be unable to do so.

Joseph Stiglitz puts it aptly in The Price of Inequality.

The focus of business people is…not to enhance societal well being…their objectives are simply to make markets work for them, to make them more profitable. But the consequence is often a less efficient economy marked by greater inequality. p. 43

The profit motive lies at the heart of our reality because the bigger profit you make, the better it is for your self-interest. But profit does not necessarily have a positive social effect. In fact, much of the time, an individual or company profits at society’s expense.

A system that celebrates the self-interested, greedy individual means those in power do not make decisions in society’s interests. They make decisions to rig the game in the interests of the highest bidder. By doing so, they do nothing wrong in the eyes of the game; they are merely conforming to the dominant beliefs that we all live by. If anyone else were in their position, you would expect them to behave the same way.

The majority must suffer for an individual to live far beyond their means. And so we have an inverted system, where some have too much, and the majority have nothing at all. The losers have no way of facilitating their self-interest because all the chips are against them. They have little choice but to face a life of poverty. Leaving the winners in a state of delusion that they have won through their supreme intelligence and hard work.

It need not be this way. But as long as self-interest and greed are not only seen as desirable traits but necessary for the market to work well, we will continue to have undesired outcomes where the majority suffer at the expense of a minority living in lavish splendour.

How Can War be Good for GDP if it Kills People?

The GDP measures everything in short, except that which makes life worthwhile. So, why do we continue using the GDP, and what's an alternative?