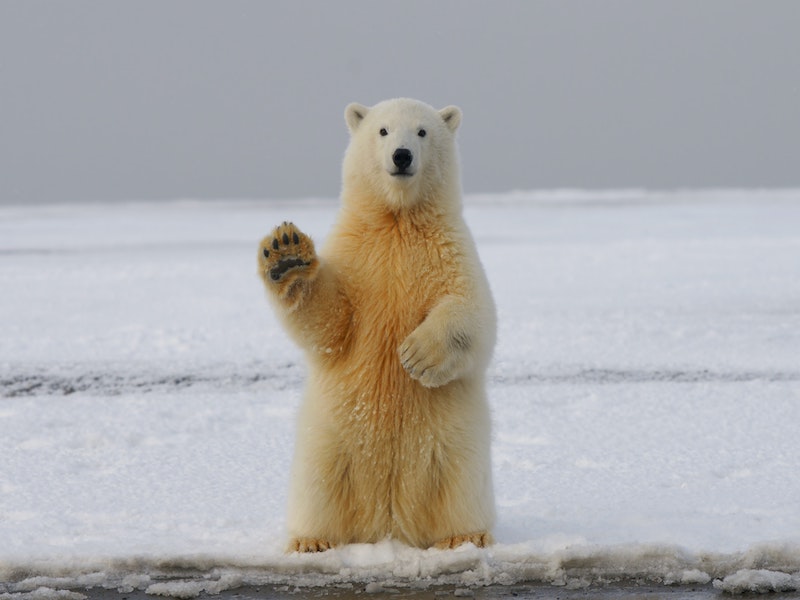 One of the first campaigns highlighting the dangers of climate change was that of polar bears becoming extinct due to the Arctic melting. The WWF first raised the alarm in the 1970s. At the time, it was effective in raising awareness that we had a problem.

Since then, the idea of polar bears becoming extinct in the wild has become synonymous with the climate crisis. While the campaign was (and still is) great at triggering an emotional response, the underlying problem with it is that it creates a misguided assumption.

Polar bears live all the way up in the Arctic. Up there, there may be a problem, but down here, I’m all good. It brings a sense of detachment from the situation we are facing.

You may shed a tear about polar bears, but afterwards, you can carry on enjoying your life as you always have. The campaign, and so many others like it, feed the illusion that the climate crisis may bring minor inconveniences, but life as we’ve always known it will continue.

All about the frame

A major problem in communicating the climate crisis to the public is the frame we use to do so.

Framing theory is a term coined by Erving Goffman, who argued that by placing attention on specific events (the frame), you can influence opinion on a subject.

In essence, framing theory suggests that how something is presented to the audience…influences the choices people make about how to process that information.

Framing is particularly prevalent in how media outlets present news stories. They do so using specific information that helps determine public opinion, attitudes or beliefs.

There are countless ways to frame a story. If you think of the story like a picture with lots of distinct elements, the frame is the part of the story the media focuses their lens on.

Importantly, it is the only part of the story the general public gets to see. Meaning public opinion is largely a product of the frame media outlets choose to convey a story.

In the case of the climate crisis, framing the story in the right way is notoriously tricky.

The idea of polar bears becoming extinct doesn’t work because it’s too detached from our daily lives. Leaving the viewer convinced that if there is a problem, it is a problem that doesn’t affect me.

Focusing on the science of the climate crisis doesn’t work because people will switch off. The frame is far too technical, and the message won’t register as you want it to in creating an effective response.

The idea of a doomsday scenario also doesn’t work. If you frame the problem as one leading to the end of civilisation, it will leave people helpless. In fact, that strategy may backfire because it could lead to people concluding that we may as well enjoy ourselves as much as we can while it lasts. Making the problem we are facing even worse than it already is.

The frame required must evoke urgency but also create a sense of action. Finding that balance is monumentally difficult. The frame always seems to dart from one extreme to another. Too detached, too emotionally driven, too scientific, too far removed from daily life, not urgent enough.

How can climate change be framed so that it triggers the necessary response?

The answer to that question alludes to the ultimate problem in framing the climate crisis. We need a frame that will create urgency and trigger people into taking positive action.

However, the inconvenient truth is that if the appropriate frame is used, no one will accept the ‘positive action’ that must be taken. They are more likely to be hostile to it.

The reality we are facing is that the climate crisis is going to destabilise the environment we depend on for life.

The world as we know it is going to change radically. That certainly should create the urgency required.

But this type of frame gets little (if any) airtime because the implicit messaging is that our way of life is the problem — and no one wants to face that reality.

The other side of the frame, taking positive action, would involve making drastic changes to our lifestyles.

For a society that is used to individual freedoms, where people buy and do what they want when they want, that is not a frame anyone would be willing to accept.

People obviously do not want a situation that threatens civilisation, but they also don’t want to give up the lifestyle causing the problem.

To make matters worse, there are still lots of people who don’t believe human-made climate change is happening. A recent YouGov poll found 13% of Americans agreed with the statement that the climate is changing “but human activity is not responsible at all”. Incredibly, 5% of those polled believed the climate was not changing.

They do so because climate deniers (and the companies that fund them) know that solving the problem we face would involve changing our way of life.

People like the Koch Brothers (who have ploughed millions into funding climate denial) do not want to face that reality because they have become rich and powerful through how things currently run. They resist change, taking comfort in the delusion that things can continue as they are.

Because they are powerful, they have the financial clout to convince others of their delusion. Their efforts have convinced lots of people question the science of climate change and therefore do not see the need to change anything.

The right frame is the wrong frame

That some people still deny there is a problem doesn’t change the fact there is one. It just makes it harder to deal with the problem effectively.

The reality we’re facing is that every minute, of every hour, of every day, the problem we face is getting worse.

While it doesn’t feel like there is a problem at present, once the climate crisis feels like a crisis, our economy and society won’t be able to maintain the lifestyles we now enjoy. It will become far harder to fulfil people’s needs in a hostile environment.

We will not be able to do what we want when we want any longer; everyone will have to get used to living within limits. Rationing might sound extreme, but in a world of 4°C of warming, it might be necessary.

When we feel the effects of the climate crisis, the need to make radical changes will hit home. But by that point, it will be too late to do anything about it.

Herein lies the ultimate paradox in finding the right frame. If the problem continues to be framed as it is, it will continue to feed the delusional sense of comfort that the problem is not as bad as it seems. That life will go on. The bitter truth is that the frame we need is the frame no one wants to admit we need.

The true impact of coal is yet to reveal itself