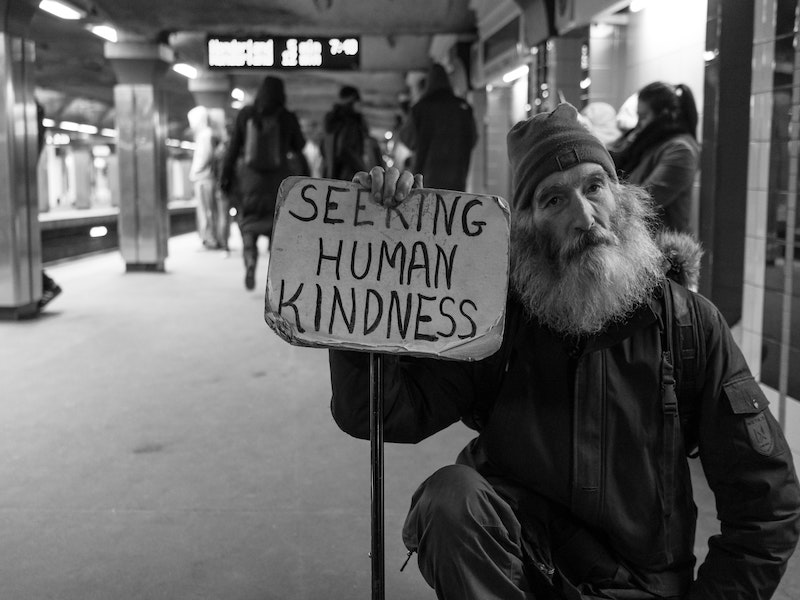 “Seeking human kindness.” When asked about the sign, Michael, the homeless man in the picture, said, “what matters is what it means to you.” For Michael, the sign means “doing a deed or expressing kindness to another person without expecting anything in return.”

In modern society, making a discovery that could benefit humanity can go two ways.

On the one hand, the person who made the discovery or had the idea patents it. Once patented, the idea is then protected, and the patent owner can charge others to use it. As a result, they can make millions, sometimes billions, from an idea.

The issue is that if the idea or discovery is so brilliant that it could benefit the whole of humanity, then the patent places a cost on the discovery. The cost means some people won’t be able to afford to use it.

This is often the case in healthcare, where those who need lifesaving drugs do not have access to them because they can’t afford to buy them.

On the other hand, there are people like Alexander Fleming.

Alexander Fleming discovered Penicillin in 1928. Penicillin is an antibiotic that has saved millions of lives because it protects people from infection. The reason for its success is that Fleming did not patent the discovery, knowing to do so would make it harder for the vulnerable to gain access to it.

Fleming could have become a very rich man, but he gave the discovery away for free.

He knew that his discovery could help save millions of lives, and chose not to patent it for the greater good. Fleming potentially did humanity one of the kindest deeds ever done. It was a beautiful act of kindness, where he expected nothing in return.

Tim Berners-Lee invented the internet in 1989. If Berners-Lee had patented his invention, it could have made him one of the world’s richest people. Again Berners-Lee realised the vast potential of his invention and gave it to the world for free. His decision means we can all go on the internet without being charged—another beautiful act of kindness where he expected nothing in return.

We take these brilliant people and their acts of kindness for granted.

More often than not, the people or companies who make discoveries patent their ideas. They choose wealth for themselves, over giving a discovery away for free and helping the whole of humanity in the process.

Society loses out as a result, as we all have to pay for the privilege of using the idea. In the case of Penicillin, that would mean the difference between life and death.

From one perspective, giving ideas away for free is logical. Had Fleming or Berners-Lee patented their ideas, they would have benefited at the cost of billions of others. Not doing so helped everyone.

From a different perspective, people may view Fleming, or Berners-Lee’s act of humble generosity, as acts of stupidity. Because in the social system we live in, the aim of the game is not about helping others. It’s about making as much money as you can from the ideas or business ventures you create.

In Fleming’s case, some may argue, if he never made the discovery, then the discovery wouldn’t have been made when it was. The cost to society for using penicillin is one he has earned as the discovery is so useful.

Using this twisted logic that dominates in modern society, Fleming was a fool for giving his idea away for free.

That some people would view Fleming’s beautiful deed as foolish says much about the system we live in. In the rat race that life has become, we’re taught to look after number one. Any idea or discovery you make should have a price on it.

It’s the unfortunate reality of our time. But the logic that now dominates misses the point, entirely.

If more people were only focused on making society a better place, rather than making money from society, many social problems wouldn’t exist.

Yet, money and profit are so addictive people can’t see how bizarre their behaviour and attitude to society is. They genuinely believe making money is more important than helping others. Even if making money comes at the detriment of others.

The only way to justify that logic is through the lens of the system we live in. It makes no sense if we view life with compassion.

Yet, because of the twisted logic that dominates many people would think Fleming is a fool for not protecting his ‘property’.

To see just how twisted the logic that now dominates is, we need only glimpse into the murky world of patent laws.

In The Price of Inequality, Joseph Stiglitz offers an insight into how twisted the world of patent laws has become.

Within the realms of patents, lawyers are all-powerful. Some firms take advantage of their power and function as ‘patent-holding companies’. These law firms buy sleeping patents (patents that have not yet been used to bring products to the market) at a low price. Then, when a company tries and bring the product to market, the law firm claims trespass and threatens to shut it down as a form of extortion.

Became the target of a patent suit from ‘patent-holding company’ NTP, Inc…it wasn’t even clear whether the patents that were supposedly infringed were valid. But until their claims are reviewed and declared invalid — which may take years and years, the “owners” of the patent can shut down any firm that might trespass, unless it pays whatever fee and accepts whatever conditions are imposed upon it…in this case, BlackBerry gave in to the demands and paid more than $600 million to NTP.

In short, ‘patent-holding companies’ exist to patent ideas created by other companies. They then bribe them out of hundreds of millions of dollars for the privilege of using the idea they came up.

They are nothing more than parasites. What is incredible is not that these parasitic law firms exist; it’s that there are laws that justify their existence.

They serve absolutely no function outside of sucking up good ideas and extorting companies into giving them money to use those ideas. Think about all the wasted time that is being misdirected towards parasitic behaviour, for the aim of making money.

Nothing about a patent-holding company is beneficial to anyone, other than the lawyers who make money from the process.

It’s not difficult to imagine what one of these parasitic law firms would have done if they had patented penicillin or the internet. They would have extorted the entire world out of billions of dollars, and we would have let them do it, because, through the eyes of the law, they would have done nothing wrong. In fact, they would have been well within their rights to charge a price for the privilege of using the idea.

To solve these types of issues, you could just change the law. Because not only should these sorts of people not be allowed to make hundreds of millions of dollars for sucking money out of society, they should go to prison for attempting to do so.

The unfortunate reality we live in is that the Flemings and Berners-Lee’s are a minority in the world. There are countless others whose only desire is to profit from society.

The minority do deeds out of kindness. The majority do deeds to make money. It is this fact that lies at the heart of so many problems we are facing.

As Micheal, the homeless man in the picture put it, if we all did deeds out of kindness and not for our own gain; human problems would blow away in the wind.

It all sounds so simple. Yet, unfortunately, the pursuit of wealth has had a terrible impact on the human psyche. It has rotten the human soul and made people mad with greed.

Only when the power of kindness overcomes the love of money and the greed that it creates will we solve our greatest social problems. As long as greed and self-interest dominate, those problems will continue to exist.