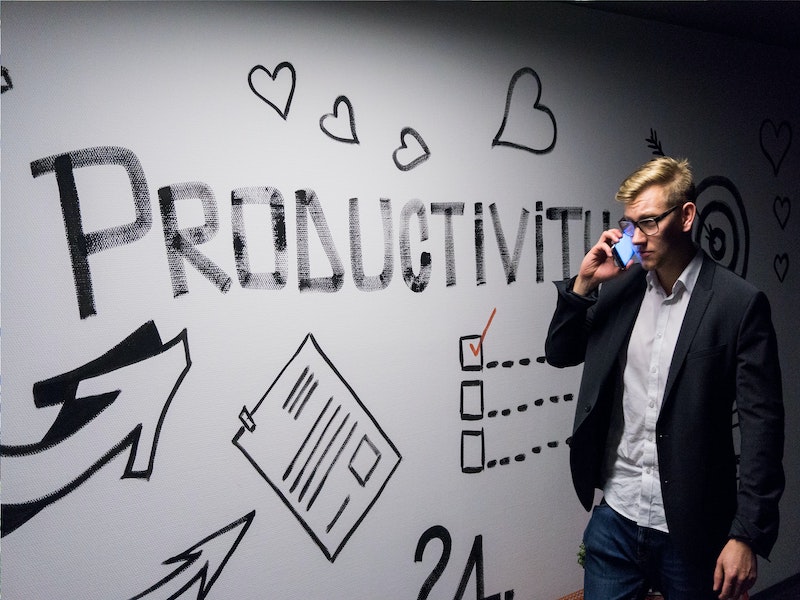 You often hear the routines of highly successful people and their highly productive lives. Each second is planned meticulously. They wake up at 4 am, do an intense workout, work 14 hour days, every single day. They digest books for breakfast, make millions, all while having enough time to raise a family. These rich, highly productive people have made it to the promised land, a land of plenty where their materialistic dreams have come true.

Hyper productivity has become embedded within our culture because it fits into a culture of consumption, where success is arranged around how much my pile of money and possessions compares to everyone else’s.

Everyone is chasing the dream because social norms are arranged around consumption. From an early age, you’re bombarded with messages that a materialistic lifestyle will lead to happiness.

In the culture of consumption, where self-worth and success are measured by your pile of money and possessions being larger than anyone else’s it goes without saying that those who have the most stuff are the most successful and must be the happiest.

In a culture where productivity is king, time itself has become a commodity. Everyone’s lives have become so full of stuff that we’re in a race against time. Time has become some kind of thing we’re constantly fighting against.

There just simply aren’t enough hours in a day. This is particularly true because time is money, every moment must be maximised to increase your pile of money.

The great irony about modern society is that we’ve never been more efficient at creating all the stuff needed to support society, and yet we’ve never had less time to enjoy the fruits of that labour.

Everyone is stuck within a cage of necessity, where they believe that working harder, doing more, beating the competition is essential to success. The thing is, everyone is chasing the same goal, and so only the most ruthless can hope to succeed.

It’s hasn’t always been this way

The thing about the modern world is that this moment in time is an anomaly. A rabid culture of productivity is the exception, a radical departure from past generations. This is the first time in human history where a culture arranged around consumption has been possible.

Life in previous generations was arranged around solving the great economic problem that has blighted humanity; getting enough food to eat.

While the majority lived a life of misery, toiling and struggling to eat enough food, the rich lived a life of leisure. A symbol of their wealth was not working. In the ancien regime in France prior to the French Revolution, it was outlawed for the nobility to work. Doing so was seen as unbecoming of someone of noble blood.

It was the same across Europe as late as the nineteenth century. A sign of wealth was not to work but to enjoy the rewards of others working for you.

Today, it’s the total opposite. The picture of success is the highly productive individual who makes every millisecond count.

From the perspective of every other period in history, this picture of success seems a little psychotic, but that’s the beauty of culture. For the majority, it’s just a normalised way of doing things. To not maximise every millisecond of every day would be strange in our culture. It’s those who don’t conform to the hyperproductive culture that are considered lazy, unworthy failures.

The thing about chasing the materialistic dream is that it doesn’t make people happy. Being materialistic has all kinds of negative social outcomes. From making people more selfish and narcissistic to inspiring envy and jealously, materialism erodes the social fabric that is so important to the healthy functioning of society.

Everyone is in a ruthless dog eat dog competition to reach the promised land. Rather than inspiring solidarity between people, materialism encourages people to see one another as direct competitors.

People are either prey you can make money from or direct competition in the race to reach the promised land. This rat race feels more schizophrenic than being the foundation of a healthy society.

Yet, that is the world we live in, one where people measure their success and self-worth based on how much they have compared to others. No one sees how bizarre the dominant beliefs and values are because it makes up our reality. Again, those that want to work 14 hour days are the ones that are celebrated rather than questioned because this is the behaviour that creates more productivity which complements the culture we live in.

It’s okay because if you don’t conform to this culture, you are on the side of history, where working enough was seen as logical. Working every hour of every day to attain material success that doesn’t make you happy doesn’t sound too appealing, so feel liberated if you don’t want to chase the dream. You are the normal one; everyone else is trapped in a cage of necessity, a living hell where the stuff they own ends up owning them.

What Would Society Look Like if Humans Were the Size of Ants?

While society appears to be functioning, it is functioning in a dysfunctional way