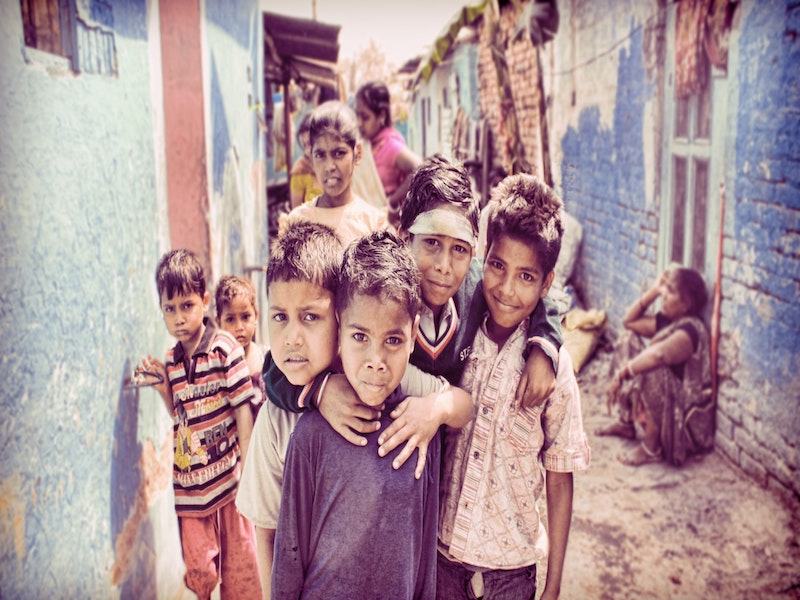 In 2020 global wealth reached $514 trillion, more than enough to provide a high standard of living for every person. And yet, 700 million people live in extreme poverty, earning under $1.90 each day. Two-fifths of humanity, nearly 3.3 billion people, live on less than $5.50 a day. If there is so much wealth, you would imagine there are lots of opportunities to make something off yourself, so are the poor to blame for their poverty?

Well, not quite. When you think about it, who would choose to live a life of poverty and suffering?

High levels of poverty are wrapped up in extreme inequality.

Apologists for inequality will say the rich have earned their money and deserve the rewards of their hard work. They’ve shown entrepreneurial spirit, grit and determination and made something of themselves. They have won the game of life through their endeavour.

You would imagine then that every person has the same opportunities to succeed. The problem with the poor is they haven’t grasped life by the horns. The underlying argument is that the malnourished or starving have somehow chosen to be poor.

A world of haves and have nots

The argument is peculiar because there is only so much wealth. For the winners to have so much, it means the losers don’t have enough.

But rather than question inequality and a world of haves and have not, inequality is celebrated.

In its Annual World’s Billionaire List, Forbes celebrated that a new billionaire was born every 17 hours in 2021. There are now 2755 billionaires with a net wealth of $13.7 trillion. That means 0.00003% of people have hoarded 2.5% of all human wealth.

Meanwhile, Elon Musk, the richest man in the world, was declared Time’s person of the year for 2021, a brilliant irony when his wealth creates so many social problems.

The issue with this massive wealth grab is that wealth that could be used to benefit billions of lives is being held, almost as if to ransom, by a tiny set of unbelievably wealthy people.

This massive injustice goes unquestioned because our reality is defined by what we see and hear. If you have always been brought up around wealth, the idea people will be living on the edge of ruin, struggling to earn enough to feed their families, is incomprehensible because your experience has defined your reality.

We can think of the problem using a classic philosophical question.

When a tree falls in the woods, and there is no one there to hear it, does it make a sound? The tress does make a sound; if it didn’t, it would break the laws of physics. But what the question is getting at is if no one hears the sound, then does that sound exist?

The same goes for those living in poverty.

If a person dies from starvation, but no one is there to see it, has that person died? Obviously, the person has died, but the problem with poverty is that it’s often out of sight and out of mind. People don’t see a problem, in just the same way that they don’t hear a tree falling to the ground.

Our world, the reality we exist in, depends on our experiences.

The lack of compassion between people is summed up by the efforts of Tony’s, an ethical chocolate company. They intentionally left one of the windows of their advent calendar missing to highlight inequality, but rather than lead people to question inequality and a world of haves and have nots, they received a deluge of complaints from unhappy customers.

If we don’t see poverty, we assume that everyone has the same experience we have. And so, the finger of blame for why so many people live in poverty is placed on the individual.

Millions on the edge of ruin

Now, if one or two people were struggling in a world where they had a strong support network and all of their basic needs provided for, you could say fair enough. Those individuals are to blame for their circumstances.

But when half the human population are suffering the effects of poverty, it’s hard to come to any other conclusion other than their suffering is by design.

This is hardly a system driven by equal opportunity. It is one where the winners have crafted the rules of the game that everyone plays to make sure they keep on winning.

But, because our reality is defined by what we see and hear, the rich don’t see injustice in the world because they benefit from that injustice.

Poverty has become normalised. Worse, it’s become justified through the lens of individualism. If someone is poor, it’s their fault. It couldn’t possibly have anything to do with the design of society that makes poverty an inevitable outcome.

Economists argue that the key to free people from poverty is economic growth. Economic growth is seen as vital to social development because it increases the incomes of all, leading to a tide that raises all boats.

But because the game is rigged in favour of the rich, they get a disproportionate amount of the benefits of economic growth flowing to themselves.

The argument would be true if it wasn’t for the fact opportunities are heavily skewed in favour of the rich.

Some wealthy individuals have giant yachts that keep growing as they swallow up all the gains of the rising tide. The poor can forget about a boat; many don’t have a life jacket to keep them afloat. They are treading water, living precariously from day to day, aware that they could be swept away from a storm or tide at any moment.

The rich are capturing the benefits of growth for themselves. In lots of cases they create the tides that lead many to drown.

These myths are driven into society because they suit the agenda of the winners. The result is that the majority suffer in silence due to the greed of a minority that knows no limits. And so long as this elite minority is allowed to craft the rules governing markets, society will continue to be fed the myth that poverty is a failure of the individual, not driven by design.