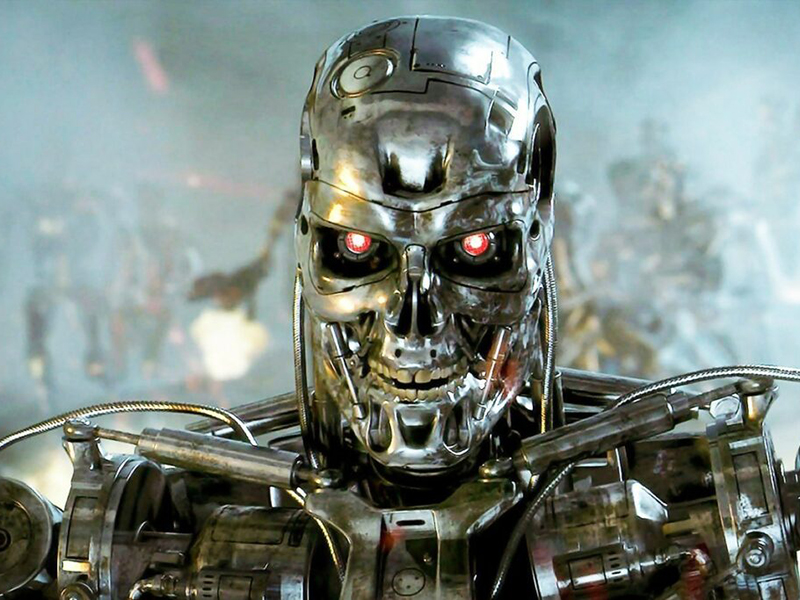 The Terminator has done much to implant a vision of the future where super-intelligent sentient robots will rage war against their human creators. Sci-fi films featuring artificial intelligence since have shared a similar narrative. While it is easy to watch these blockbusters and detach from everyday reality, this vision of the future is a genuine concern. For some, the development of AI is likened to a child playing with a bomb.

But why should we fear the advent of super-intelligent sentient robots?

If superintelligent AI comes into existence, the fear is their intelligence will be totally incomprehensible to us. To put this into context, it takes a neuron a microsecond to travel one foot. It takes an electron a nanosecond to travel the same distance. So a sentient robot will be able to think a million times quicker then we can.

If AI reaches a tipping point where it is able to design itself and evolve, it will do so at a rate we aren’t able to fathom. So it will become so intelligent that we as the initial designer will become irrelevant. Ultimately the fear is that AI will use its intelligence to become the dominant species on Earth.

Will the dominator become dominated?

Fearing the potential possibilities of a super-intelligent species reflects the human experience. This is one of domination. The idea we’re in control shapes our reality. We feel superior to other living creatures due to our ability to control and shape the world around us.

If we do reach a time where we create super-intelligent robots they will learn about reality through this human experience. Our lens will shape their initial understanding of the world around them. We have every reason to be fearful if their reality is influenced by how we behave. I for one wouldn’t enjoy being treated the way that we treat other living creatures.

Our intelligence separates us from other sentient animals. We see ourselves as all powerful, and this gives us an air of arrogance as a species. Imagine if there are robots who take our place as the most intelligent species on Earth? It would change our status in the order of things, and affect our psychology and understanding of who we are. Suddenly from being the most intelligent species on Earth, there are sentient robots whose intelligence is far superior to our own. It’s interesting to consider how this radical change would influence humankind’s psyche.

Our understanding of intelligence is that this enables you to control the world around you for your own gain. So we fear that another intelligent species would behave in a similar fashion.

The judge becomes the judged

We may fear domination, but maybe we should be fearful of being judged. As a species, we have committed some atrocious acts against the natural world, one another and other living species.

But this idea that sentient robots would judge our behaviour is based on how we perceive reality. We can only see the world the way we experience it. How a super-intelligent robot will perceive reality cannot be foreseen.

Our narrative has been to dominate the world in a destructive manner. Why do we assume AI would think or choose to behave the way we do?

To add a layer of complexity, we may live in unnatural ecosystems that distort our behaviour, but we are still biological. Our biology influences our behaviour and actions. AI won’t have that biological makeup. This only adds to the uncertainty in terms of thinking about how their thoughts will translate into actions.

Ultimately it seems futile to think about how a vastly intelligent species will behave. Our perspective and intelligence are limited by our capacity to think the way we do. It’s impossible for us to think any other way, let alone as a sentient robot possible of thinking a million times quicker than us. It’s not possible to imagine the consequences of the rise of AI outside of our own experience of the world. That experience is one of domination and destruction, and so naturally we assume that AI will behave in a similar fashion.

If we are so fearful of domination, how about we stop developing AI so we don’t have to think about a time when AI becomes sentient? If we did then the question would become irrelevant. But our inquisitiveness and desire to test boundaries is what has allowed us to make technological breakthroughs. Our pursuit to develop sentient AI almost seems inevitable.

Could super-intelligent AI help us?

It’s a sad reflection of the human experience that we only assume the worst when thinking about sharing Earth with an intelligence superior to our own. This is reflective of our relationship with the world around us.

We are currently facing an unprecedented existential crisis. Our behaviour as a species is resulting in a climate catastrophe that threatens our very existence. This is the greatest challenge humanity has ever faced.

The dilemma is that although the current system must transform to avoid the worst effects of a changing climate, doing so would threaten vested interests in the current way of doing things. The problem requires systemic change, but this would require those in power to give up that power. I can’t think of an example where a group voluntarily gave up power for the greater good.

We fear AI will lead to our domination or destruction, but we’re doing a good enough job of destroying humanity ourselves.

Rather than dominate us, maybe AI would seek to correct the problems on earth? They might conclude that the most efficient way to allow life to flourish would be to eliminate the threat to the flourishment of nature. The issue is that we are creating the problem. Humanity is that threat.

The sad reality is that we fear robots because we fear ourselves.

We look to control and dominate rather than nurture and protect. If our relationship with the world around us changed, this would alter our lens and view of reality. Maybe our conception of other intelligent life would alter with this change of perspective, and with it how sentient AI would behave towards us.

Why are Psychopaths Successful in Business?

Psychopaths thrive in society, but what is it about our society that allows these rotten apples to do so?