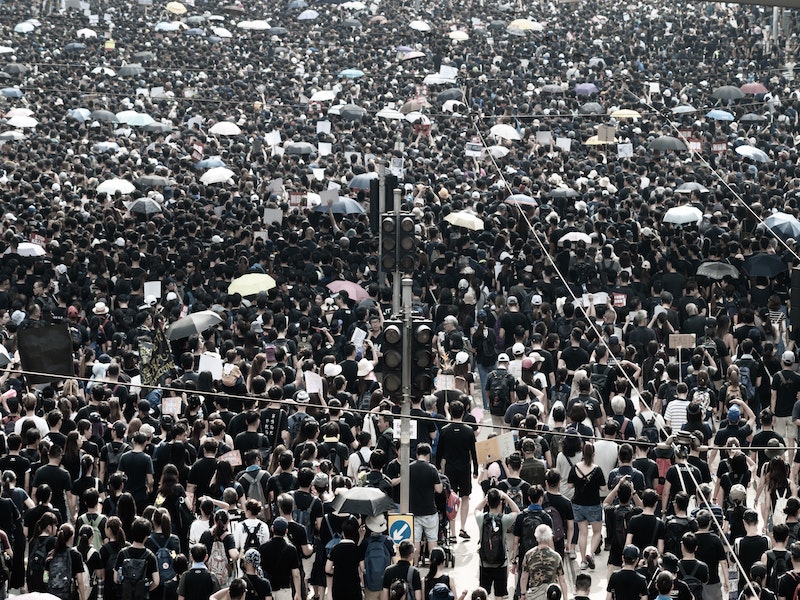 Many people argue overpopulation is the reason we’re facing so many environmental and social challenges. If only there weren’t so many of us issues such as the climate crisis, biodiversity loss, and habitat destruction would disappear. Whenever someone makes this argument they never dare utter the solution to the problem. Because, if correct, overpopulation has terrifying consequences.

The only way to solve the problem is huge numbers of people, and by huge we’re talking hundreds of millions (if not billions of people), would need to die to save humanity. No one in their right mind is going to say that, as it’s an evil proposition. But by suggesting we’re overpopulated that’s exactly what you’re inferring.

The reason many people argue we’re overpopulated is that a growing population has an insatiable appetite for energy. The human population is increasing by 81 million people per year. At this growth rate, there will be 10 billion people by 2050. By that time, experts predict we’ll need to generate 50% more energy to meet the global demand.

The only way we can hope to meet this huge surge in demand is by increasing our dependence on fossil fuels. At a time when we need to aggressively reduce our use of fossil fuels, you see the dilemma we’re facing.

We’re caught in a Malthusian catastrophe. Where the growth of the human population is outpacing our ability to meet the energy demands of that population sustainably.

If we do meet the energy demands, it’s likely to result in catastrophe. The Intergovernmental Panel on Climate Change (IPCC) argues we must limit global warming by 1.5°C to reduce the risks of climate change. The IPCC suggests “limiting warming to 1.5°C implies reaching net-zero CO2 emissions globally around 2050”. Net-zero doesn’t mean there are zero emissions, but that there is a balance between carbon emitted into the atmosphere and carbon removed from the atmosphere.

As the graph below highlights, we’re a long way from net-zero emissions. Year on year CO2 emissions increase. Last year we emitted 33GTCO2, a record.

In the same report, the IPCC calculates the global carbon budget. The carbon budget is the amount of carbon we’re able to emit into the atmosphere before we exceed the 1.5°C target. There is wide variation in the estimate but erring on the side of optimism (we need to be optimistic here) let’s use the IPCC’s upper threshold of a carbon budget of 840GtCO2.

Based on last years emissions, we’re set to exceed the carbon budget in 33 years.

But, with global energy demands predicted to increase by 50% in the next 30 years, it’s safe to assume CO2 emissions will increase. Meaning the carbon budget will run out much quicker.

Meeting the energy demands of a growing population in conventional ways (using fossil fuels) will kiss goodbye to any hope of limiting the impacts of the climate crisis. A scenario of runaway climate change would be the most likely outcome.

The future is looking more and more like a nightmare waiting to happen.

Unless we’re hit by a deadly plague that wipes out most of humanity, overpopulation is a problem we have to solve. The alternative, mass genocide on a global scale, where whole sections of humanity are slaughtered, clearly isn’t an option.

The danger with the overpopulation argument is that by making the suggestion we help the idea fester and distil through society. Almost as if (or when) the time comes, the justification for doing something unimaginable would already have been sown.

The solution to the dilemma requires a transformation of our economic and social systems on a global scale.

Lots of prominent figures have presented this argument, and many people believe it to be common knowledge we’re overpopulated. But overpopulation will only become a problem if we let it become one.

The myth of overpopulation

We’re not overpopulated by people. We’re overwhelmed by consumption, consumed by greed, drowning in debt. These are things that make a growing population a problem. Not the growth in population in and of itself. And the reason these undesired outcomes are manifesting is due to the mantra of economic growth.

It’s the never-ending pursuit of economic growth, coupled with a growing population which is the very reason our energy demands are set to increase exponentially.

Consumption is the fuel feeding the growth machine and nothing embodies consumption more than the Western lifestyle. A lifestyle which lionises excess and provides the illusion all our wants and needs can be satisfied by buying stuff. We’re manipulated to have more, want more, need more because the stuff we own is a symbol of success.

Earth Overshoot Day is another symbol of how unsustainable the Western lifestyle is. “Earth Overshoot Day marks the date when humanity’s demand for ecological resources and services in a given year exceeds what Earth can regenerate in that year.” Leading to an ecological debt we can’t payback.

As the graphic shows, the consumption habits of different countries aren’t the same. If we all lived like Indonesians Earth Overshoot Day would land on December 18th — meaning we’d be closer to living in a sustainable world. On the other hand, if everyone consumed at the same rate as Qatar we would exceed the Earths carrying capacity on February 11th. A terrifying prospect!

Then there are lots of countries who don’t appear on the map at all (many in Sub-Saharan Africa). Because if we all lived like these countries Earth wouldn’t overshoot.

The issue here is these countries don’t consume enough to be able to meet their needs. As a result, they suffer the debilitating effects of chronic poverty.

What the graphic symbolises is humanity is out of balance. Where some countries consume far too much, and others don’t consume enough. A consumption fuelled economy is the real problem, not overpopulation.

The overpopulation argument is a convenient one to make for those who don’t want anything to change. The wealthy elite and the ‘winners’ in this system are doing fine the way things are. They have no interest in sacrificing their standard of living for the greater good.

Many people have become so detached from reality, so blinded by the lavishness of their own lives and so consumed by their self-interest, that if given a choice they would rather push the ‘kill billions of people’ button, then the ‘create a sustainable world’ button. All to maintain their lifestyles. And, quite frankly, the cries of anguish from those suffering won’t be a problem when you can’t hear the cries.

The reason I say this is because the solution to the dilemma requires a transformation of our economic and social systems on a global scale.

We need to decrease our energy demands dramatically and control the increase in population. The ways to do that are to reprioritise our economy away from the pursuit of stuff, towards providing the needs of each person in society.

This would require a redistribution of wealth, so those who have nothing at all can meet their needs. While others who live lavish consumer-centric lifestyles can no longer do so.

Rather than a competition to outdo one another in a mad race with no end, what’s required is a society focused on sharing, not owning. A society rewarding altruism, not selfishness, a society lambasting the hoarding of wealth and inequality, not celebrating it.

This transformation can only happen if the ‘winners’ willingly sacrifice their standard of living. Realistically, do you think that’s going to happen?

The paths we have laying in front of us are simple, and yet the consequences of each path are very different.

We either choose a path where we refuse to acknowledge the need to transform our economy and society. A path which could lead to a Malthusian Catastrophe.

Or, we heed the alarm bells and create a sustainable economy and society where wealth is redistributed. We can then begin to manage the population naturally.

Fertility rates tend to decrease when countries become more affluent, when women are more empowered, when children stay in education for longer and when, crucially, people are able…to use good, modern family planning.

What’s clear is we will all benefit from a more equal world.

Would you die for humanity?

Without a redistribution of wealth, we’ll continue to hurtle towards a terrifying future.

If you want to live in a world where billions of people have to die to maintain your standard of living, then keep on doing what you’re doing. If you find that idea intolerable than start changing your behaviour.

You and I have the power to control our destiny. We must start to wake people up from the myth of overpopulation and focus on the real problem of consumption. We have the arduous task of encouraging people to sacrifice their standard of living to allow others to prosper. I’m under no illusions we have a mountain to climb to do this. If we fail, and people aren’t willing to make that sacrifice, rather then drowning in stuff, we may live in a future where we’re drowning in blood.

Why Utopia is a Possibility, not a Dreamland

We have the technological knowhow to create a sustainable society