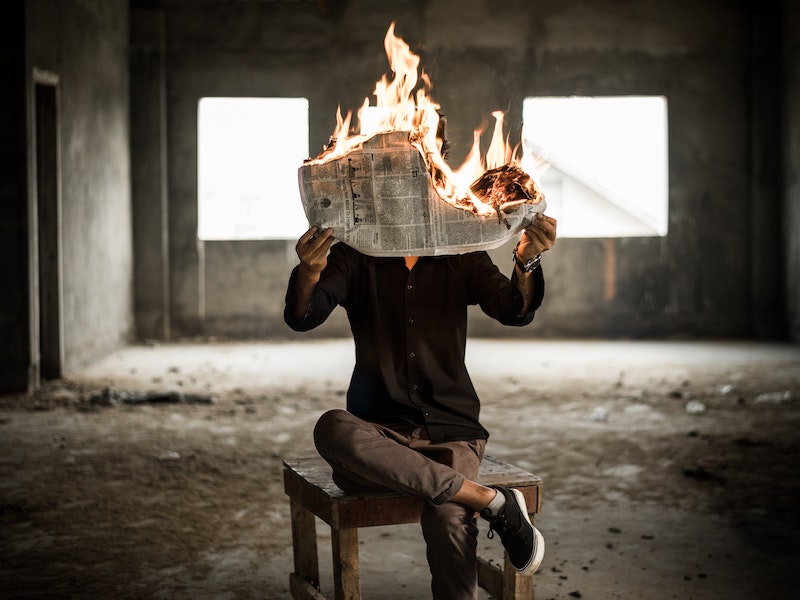 If you’ve reached this far, congratulations, you’re in a minority of people in terms of how you read the news. That’s because six out of ten people read the title of an article, make a judgement based on their own preconceptions and then move on. Social media has radically changed the way we digest information. And with over 55% of Americans and 50% of people in the UK now relying on social media for their news, it’s influence on society has become far-reaching.

Social media is designed to keep you moving, to make you click on lots of different content, quickly glance at it, and move on. The result is a change in how we digest information. Such is the sheer abundance of content on social media no one has any time to take five minutes out of their day to read an article.

In this landscape, content creators have enormous influence over their followers, who believe the influencer to be a source of ‘truth’.

Because no one bothers to read anymore, it means people agree with the content at face value, without delving any deeper.

The source of truth may have no authority in a field. They may even have made up a piece of information. Yet, because they have a massive following, people believe in the information without questioning it.

This has led to the age of (mis)information. Where experts who have studied for years in a field are ignored as their way of presenting information, by its nature, isn’t conducive to being exciting and easily digestible. For the simple fact that it is complex, and can’t be understood in a short clip or photo.

In contrast, prominent social media ‘influencers’ can create suggestible content that isn’t true. But because so many people follow them, it provides them with the confidence and authority to believe they are a fountain of knowledge spreading the ‘truth’.

It’s in this climate where myths become facts because no one has any certainty about what to believe. How to separate fact from fiction. It becomes impossible to know what information has been thoroughly researched, and what has been concocted out of someone’s mind.

The Coronavirus pandemic has been a breeding ground for myths to spread, particularly within the anti-vaccination movement. ‘Anti-vaxxers’ don’t believe vaccinations help ward off infectious diseases.

While a small minority of people hold such a belief, it doesn’t pose a problem to society. But in the current climate, a belief in the danger of vaccinations to one’s health has become a truth in the eyes of many.

The ‘anti-vaxxer’ movement has now ballooned into a global movement as a result of myths spreading through social media.

In the UK, a survey found 20% of people will be ‘likely’ to refuse a vaccine. The reasons why vary. On one side, there are those anxious over side-effects. On the other end of the scale, some believe vaccinations programmes aren’t necessary and have been conjured up for financial gain.

When asked to respond to the findings, Dr Daisy Fancourt said; “People have spoken about regulation, approval and things like that over the course of this pandemic but not everyone necessarily understands what that means.”

And here is the crucial point. So many people now come to understand the world through influential people on social media — but these people are not authorities. Often, they don’t know what they’re talking about, and yet they have a platform where they can be enormously influential on peoples views of the world.

Once these self-proclaimed figures of authority create myths, the myth cascades from the source and is shared rapidly. As the majority do not read information but glean the title, the new information works to reinforce and strengthen their opinion on a subject.

When content is so easily digestible on social media, it becomes all too easy for the misinformed to misinform others, who also become misinformed, creating a train of (mis)information, where myths become facts. And once a truth has been created out of a myth, people can act on a misguided belief in the real world.

The confidence they have in thinking they know a lot about a subject when, in reality, they know next to nothing is known as the Dunning Kruger Effect.

The Dunning-Kruger effect is where a lack of knowledge on a subject breeds confidence in someone that they know all there is to know. But it is their ignorance of a subject, the fact they have no idea just how much there is to know, that creates this misplaced confidence.

It’s only when you start reading into a subject that you come to realise just how much there is to know. With this realisation, it begins to dawn on you how little you do know. That realisation is the ‘valley of despair’.

It is only when a person dedicates themselves to deep diving into a subject that they start climbing the ‘slope of enlightenment’. Where the pieces start to fit together, and eventually, they reach the ‘plateau of sustainability’. Here, the expert will not know everything there is to know (that’s not possible). But they’ll have a deep enough understanding of what they do know to have the same level of confidence as those on Mt Stupid.

In the ‘age of woke’, it seems everyone knows something about everything. The ‘woke’ have read snippets of information and now believe themselves to be part of an awoken tribe who know the answers to life’s greatest riddles. In reality, they are a product of the Dunning-Kruger effect, sitting on top of Mt Stupid.

Their lack of knowledge is beside the point, though, because on social media, how much you know isn’t relevant. What is, is that the content is entertaining. The more inflammatory the content, the better, because controversy gets you more followers, which is the aim of the game — not to inform anyone of anything. And having more followers works to strengthen the confidence you have that you know exactly what you’re talking about because people are responding positively.

A tragedy of the age of (mis)information is that those experts who do know what they’re talking about have been shunted. Ignored because they do not use social media to present their argument — they do so through peer-reviewed journals and books. But who has time to read a book?

It’s far easier to look at a picture, with a few sentences offering an explanation. The explanation has no references supporting the argument. The social media guru merely has the power of hundreds of thousands.

With so much noise, the person who speaks the loudest gets attention. Not the experts who work diligently behind the scenes.

The greatest danger is that social media uses algorithms to feed you content. Knowing you’ll find it interesting based on the previous content you have looked at. Algorithms work to filter news, so you only see and read about the things you already believe in. You never get to see or hear about any other argument, which makes everyone on the train of misinformation even more confident they know everything there is to know about a subject.

The ‘age of the woke’, is actually the ‘age of the (mis)informed’, where those who believe themselves to be ‘woke’ have been provided with a platform to misinform countless others. In this situation, the validity and strength of experts become diluted, because what does an expert know about something that I don’t know?

The Age of Woke means those on Mt Stupid start to distrust experts who’ve plied years into learning about a field and come to believe those who have no idea what they’re talking about. I’m not sure what the solution to the problem is. If anything, it feels like the issue is going to get worse as social media offers such delightfully easy content to digest.

If this trend continues, there will be no truth in the world. People will get lost in their own interpretations of reality, which is the greatest threat of all because society only works when people have a common understanding of the world around them. When people start believing anything they’re told and act on that information, things could quickly descend into chaos.