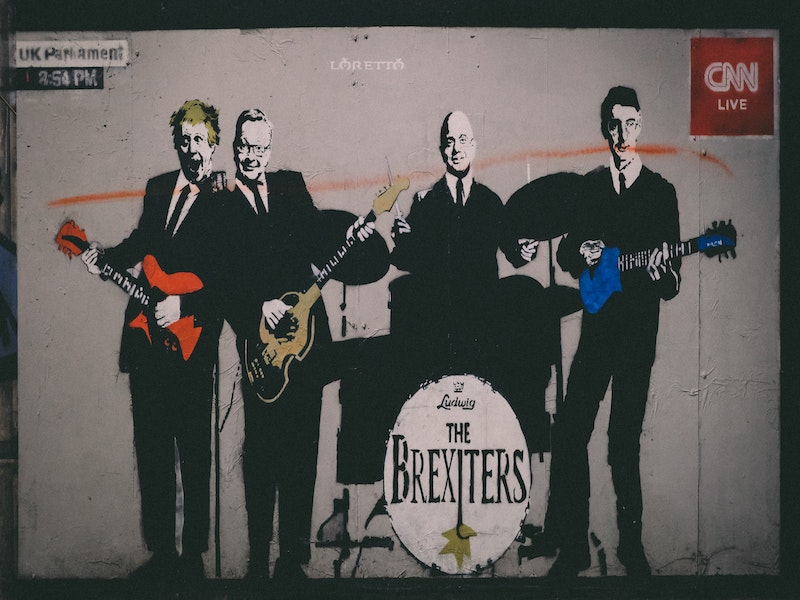 “You know very well the country is being ruined by foreigners. Just go to a shop and buy something: look round the place an’ you’ll see that more than ’arf the damn stuff comes from abroad. They’re able to sell them goods ’ere because they don’t ’ave to pay no dooty, but they takes care to put every dooties on our goods to keep ’em out of their countries; and I say it’s about time it was stopped.”

It’s not hard to imagine hearing these words spoken at the pub, with family members, or maybe even a political party conference. But these are the words of Bob Crass, a fictional working-class builder from The Ragged Trousered Philanthropists, a semi-autobiographical novel set in Edwardian Britain over 100 years ago.

That the words were as relevant 100 years ago as they are today, shows the political elite regurgitates the same ‘problems’, over and over again. They do so because they know blaming ‘the other’ is so effective in deflecting attention away from themselves and towards a specific target, vis a vis, the foreigner.

Why these words sound so familiar is that they lay at the heart of the argument to leave the European Union (EU). Those in favour of leaving Europe believe Brexit will solve Britain’s problems, and make their lives better off as a result. By controlling immigration, and creating our own trade deals, Britain is taking back control of its destiny.

Voting for the hope of change

Lots of people voted for Brexit out of a desire to make their lives better. And whatever your opinion on the referendum, the vote to leave did offer an alternative to the status quo.

Life is so bad for so many that it couldn’t possibly get any worse by changing the dynamic. In offering change, Brexit provided hope. And the vote to leave was an impassioned plea articulated through a national referendum that enough is enough.

The referendum provided the voiceless, particularly in poverty-stricken areas in the North of England, an opportunity to vent their frustrations at a system that doesn’t work for them. Looking at it from their perspective, what did they have to lose by voting for Brexit?

The chance to break free from the EU created an opportunity to bring fundamental change and replace a life of suffering, with one of prosperity.

Blaming social problems on foreigners is a powerful tactic used again and again because it offers such a simple, yet on the face of it, logical explanation for why there are no jobs or opportunity, leading to your poverty. And at first glance, it seems to make sense. The more competition there is for jobs, the harder it is for those born in the country to get one.

Blaming foreigners for social problems also provides issues with a ‘face’ that you can vent your frustrations and anger towards.

The blame for your situation could never be levelled at politicians governing the country, certainly not.

Underlying the argument, the only conclusion to be made is that if we only get rid of all these darn foreigners, and we took back control of the country, then all the problems will blow away in the wind.

Well, Brexit will give us an excellent opportunity to find out if the argument has a solid base. Because the vote to leave the EU will limit the freedom of movement, and provide Britain with an opportunity to forge its own path in the world. Creating trade deals of its own, rather than being a bit-part player within the EU.

The reality is that the argument in favour of leaving the EU was all a sham, drummed into society by a tiny group of politicians that want to bring back the ‘good ol’ days’ — when Britain ruled the seas.

These imperialists, represented by the detestable Nigel Farage and the UK Independence Party (UKIP), are so out of touch with reality, they believe it to be better for Britain to go it alone, then to be united under a Europe that works together.

The sham is that for this band of brothers, Brexit is a moral victory — a source of pride and nothing more. It’s irrelevant whether it makes Britain better off as a nation. That was never their gripe. They want an independent Great Britain because Britain is ‘Great’. We certainly don’t need to rely on others to remain great, and relevant.

The tragedy of the whole affair is that life is not going to improve by stopping foreigners coming into the country, for the simple reason that foreigners are not the cause of social problems.

In the last 41 years, since Margaret Thatcher took power in 1979, 28 years have been under a Right Wing, Conservative government. In that time, life has not improved for the majority because the decisions made in the country are never about improving your life; they are all about retaining the status quo.

The Tories have never, and will never, care about the working class and attempting to make your life better because their idealogy is against doing so. They don’t believe in cooperation and creating a harmonious society which works for all. They believe in sustaining conditions that are ripe for the self-interested individual to flourish.

How will life change?

The EU represents cooperation. It is a symbol of a common agreement, united by shared values and ideas.

Britain has severed that vision, the tragedy of the matter is that breaking away from Europe works to breed hate, division and fear.

Rather than making life better, Brexit will create a more divided country. With division comes increased racism and xenophobia. And where hatred wins, it provides racists and nationalists with the fuel to stoke the fires.

You see, they tell one another, the foreigners are the problem after all.

A divided country is exactly what the Conservatives want. They want people disliking one another. Because hatred of one another means people are so focused on the differences in society, they never stop to think that actually, the real problem is the structure of the system itself.

They do so to distract you. To make you believe your problems aren’t the result of a system designed to maintain the status quo, and ensure a wealthy elite remains wealthy.

It’s not just Britain suffering from too many foreigners coming into their country. Europe is seeing a rise in nationalism with lots of politicians focusing on foreigners as the cause of social ills. It seems the plague of foreigners, is affecting every country, at the same time. If only the foreigners’ would stay put then everything will be okay in life.

So will Britain winning back it’s sovereignty make it great again? No. If we did want to make Britain great, surely we should be encouraging unity, inclusion and solidarity? What we have is an imperialist crusade, which is a symbol of division, intolerance, and hatred. The greatest tragedy of all is that hate has won through, and we will all be worse off as a result.