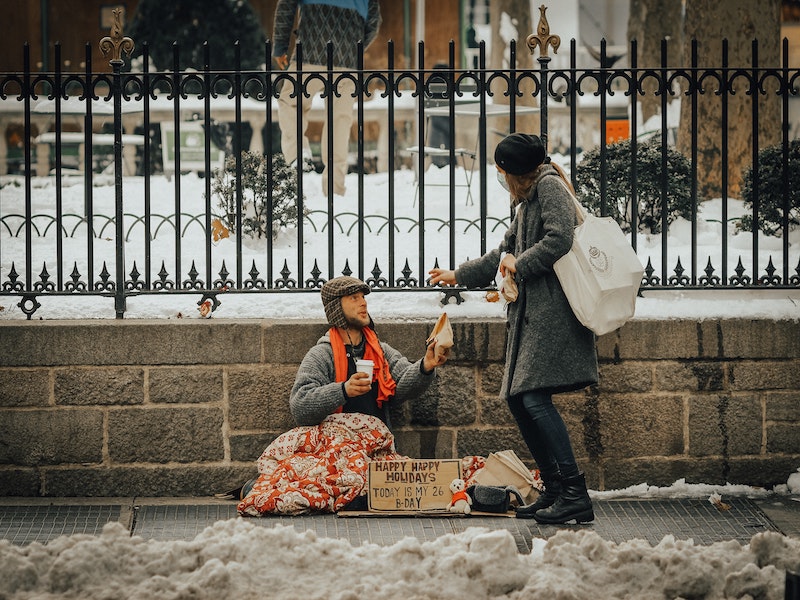 There’s a common perception that the homeless are to blame for their situation. They haven’t worked hard enough; they have the wrong attitude; they’re failures.

If there were a handful of people living homeless, the argument might be valid. But, when over 225,000 people in the UK and over 500,000 people in the US (nearly 60,000 in Los Angeles alone) are homeless, that argument holds little weight. Homelessness is a systemic social failure, and the homeless are victims of a system that fails to offer support for those when times get tough.

Things don’t always go according to plan in life, and if someone’s life spirals to the point where they land themselves facing the prospect of having to sleep rough, there is no social safety net to protect people before they face that prospect.

There is a ready-made solution to the problem. It’s estimated that in London, there are over 80,000 vacant properties, while Los Angeles has over 93,000 properties serving no purpose other than collecting dust.

If vacant homes were repurposed, they could be offered to someone facing the prospect of homelessness as temporary accommodation, let’s say, for six months, to get themselves back on their feet.

Having a social safety net that protects those that have lost a job and can’t afford to pay rent, or the countless other reasons someone is forced onto the streets, would protect people and provide them time to resolve their situation.

At present, there is no such safety net — you either sink or swim. That’s a product of a belief in rampant individualism where you are responsible for your destiny. The successful are those who work the hardest and show grit and determination — the failures are those who have no motivation, drive, or passion.

The naysayers may argue why should society foot the bill for those who can’t look after themselves? But homelessness does cost the taxpayer plenty of money — an estimated £20,128 per homeless person in the UK — in fact.

So it could be far cheaper to focus on supporting those who need shelter on a medium-term basis than to allow them to rot on the streets.

There is no moral, financial, or rational reason for not preventing people from sleeping rough. The real reason behind the continued failure to solve homelessness is that governments use the homeless as a social weapon.

They use the homeless to remind you of what could happen if you don’t conform. If you don’t stay on the straight and narrow and keep working hard. It’s not about them — it’s about you. It’s about the feeling you get when the homeless ask you for money, knowing all too well that you are helpless to help them get out of their situation.

No matter how laborious or mundane work can be, those moments, when faced with the reality of homelessness, provides the stark alternative. If you don’t work, you will face a life of utter misery and suffering; you’ll be considered a failure, just like them.

What type of world are we living in where it would be cheaper to stop homelessness than to let someone go on the streets, yet we choose the latter option? We’ve created a vicious, ruthless society that encourages a dog-eat-dog mentality. Most will do just about anything to get to the top because they know that if they’re not ruthless, they might end up in the gutter.

Everyone is aware they are balancing precariously on a tightrope — make a wrong move, and you might fall off. If you do, the walls to get back on track can be oh so steep.

No one feels safe or secure; you always have to have your wits about you. It’s just plain sad, stressful, and anxiety-inducing. It doesn’t need to be this way, yet it is because the government couldn’t be further removed from the day-to-day reality of people’s lives.

The government often comprises wealthy members of the establishment. How can these rich, entitled, privately educated individuals possibly empathize or even be able to comprehend the situation of someone who finds themselves without a home and without the finances to afford a home? From their privileged perspective, it must be that the person simply hasn’t worked hard enough, and they have to ‘pull themselves together’. Or, more likely, they simply don’t care and haven’t given it a moment’s notice.

The fact it would be cheaper to prevent homelessness than let someone suffer on the streets must be the most compelling argument for supporting them before they become homeless. Yet, in a world where the individual is king, the idea that the government would create welfare policies that focus on preventing a social failure isn’t even comprehended. They are homeless because they didn’t try hard enough — that’s the government’s attitude. And you better remember that lesson, otherwise, you could be the next victim.