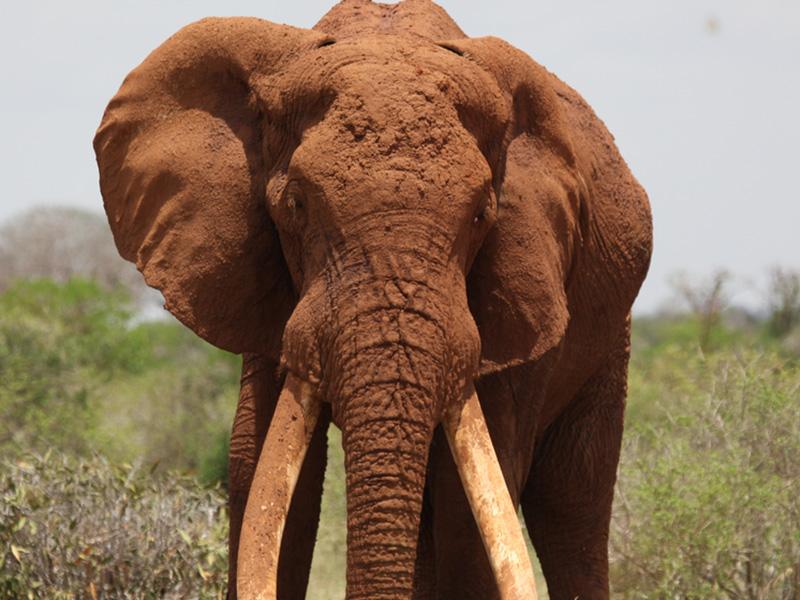 Every day, poachers kill 100 African elephants for their ivory, meat and body parts. If this killing spree continues the African elephant will be extinct in the wild by 2030.

Never again would magnificent elephants like Satao walk the African Savannah. Satao was a ‘tusker’, a rare elephant with tusks estimated to weigh 100 pounds (45 kg) each and stretching 2m to the ground. Satao’s magnificence made him vulnerable. While the majority would look upon him in wonderment, others saw a valuable prize. Due to the value of his tusks, Satao was murdered by poachers.

The killing of elephants represents human greed. For some, elephant tusks are more valuable than the living elephant. But we can’t live on Earth by ourselves. We depend on biodiversity for our own survival. Saving elephants in the wild will represent a turning point in how we view animal species and our role in preserving and sustaining nature, not destroying it.

The current punishment for poaching elephants is a life sentence or a fine of $200,000. Last year, it was reported Najib Balala, Kenya’s tourism and wildlife minister was planning to fast track a law that would make poaching a crime punishable by death. It turned out this story wasn’t true and there are no plans to introduce a death penalty.

But, with elephant numbers plummeting, it’s worth asking the question. If Kenya introduced a death penalty for poaching, would it stop the murder of elephants?

Would a death penalty stop poaching?

To answer the question, we need to ask, why do poachers kill elephants? They do so because of demand for ivory in countries such as China, Philippines, Thailand and the United States.

If the vision is to eradicate poaching then introducing a death penalty won’t help solve the problem, because it won’t stop the demand. A death penalty would work to exacerbate the issue. If a life sentence or a $200,000 fine doesn’t act as a deterrent, why would the death penalty? This heightens the risk — increasing the value of ivory, which makes the reward all the greater.

Placing a further draconian measure on the act of poaching doesn’t prevent demand on the black market. And so poachers will continue to take risks to kill elephants for their ivory. The brutal reality is that in any market scarcity increases the value of a commodity. Ivory traders want the elephant to go extinct. The closer the elephant gets to becoming extinct, the rarer ivory becomes, and so the price increases.

Let’s stop focusing on poachers and place a lens on those who demand ivory. If we can stop the demand, we will stop the act, and save the African elephant from extinction.

Why do people buy ivory?

A survey carried out a few years ago on peoples motivations for buying ivory had some unexpected results. It found people buying ivory would support banning its sale, but the threat posed to elephants was outweighed by;

The allure of “white gold” — especially among young fashionistas…who see ivory as a way to project an image of wealth and social status.

The issue is a disconnect between the ‘product’, and the steps involved in making that product. The truth behind ‘white gold’ isn’t perceived by those purchasing products made of ivory. There is a detachment from the outcome of their purchase — the slaughter of an elephant for its tusks.

The issue with the sale of ivory is symptomatic of a far greater problem. We view all life and the living planet as resources to be used when we choose, disregarding the intrinsic beauty of animals such as elephants. We find greater value in making trinkets and ornaments from their dead body parts. This reflects a broken relationship with the natural world.

Our disconnect with the natural world is seen in contradictions between our views, and our actions. For example, dogs are loved in some parts of the world but eaten in other parts. Eating dogs repulses those who consider dogs as pets. This same group eats cows, an animal considered sacred in another part of the world.

Why is it acceptable to eat one animal, but wrong to eat another? This comes down to our social conditioning. We can’t see contradictions in our views because they make up our reality.

If societal norms make it acceptable to kill some animals for their flesh, why is it unacceptable to kill elephants for their tusks? Whether it’s the agricultural industry or the ivory trade, we view the animal as a commodity, which has no intrinsic value in life, only in death.

Each living thing shares a consciousness of life. Every species is dependent on the biosphere to survive. But our connection to this shared consciousness has been severed.

We’re blinded by a societal construct placing an emphasis on the pursuit of wealth as the ultimate success factor. The biosphere is a resource base that we pillage to accumulate wealth.

This disconnect is leading us to collapse.

We are a part of an interconnected web of life, but our social construct disregards this. In fact, the success factors of our system place a higher value on wealth generation then on preserving a healthy biosphere. If this state of affairs continues we’re doomed.

Humans are incredible and can achieve remarkable things. But we are also destructive. We have the power to destroy and inflict pain and anguish in the natural world. But we also have the power to change our behaviour and create a symbiosis where humanity can flourish alongside nature.

Peoples everyday actions are leading us to environmental catastrophe

Why Egomaniacs Have a Toxic Influence On the Environmental Movement

The ego is a symbol of the ecological crisis, to solve it we need to move towards an 'eco' perspective