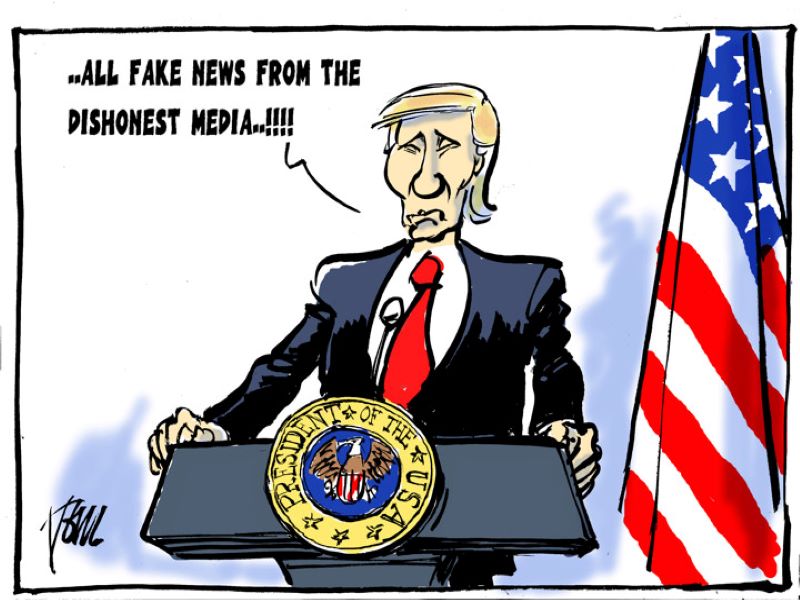 Donald Trump’s presidency has been a rocky ride. The American people seem to wait with bated breath each time Trump makes a speech or sends a tweet. There’s no risk of them holding their breath for too long. Such has been the litany of almost daily remarks from Trump making you want to squirm. One thing he’s been unintentionally right about though is fake news.

The intention of this slogan is to make people question the validity of some news stories. Trump doesn’t question the legitimacy of all news stories, only stories that don’t agree with him. By doing so, he has convinced his own supporters that any story with a negative spin towards himself is false.

To brand a story as fake news, we can assume any news story he does agree with is true news. Fake news then is about Donald Trump disagreeing with a certain interpretation. This has undertones of an attempt to control the media and how they express opinions. Hardly in the spirit of free speech.

While Trump’s slogan fake news is flagrantly narcissistic, we should question all news stories because each news story is an interpretation of an event.

The power of the media

The media is one of the most powerful forces in society. Its function is to bring awareness of the world around us. This commentary is pivotal in shaping our perspective and helps reaffirm belief systems. It conveys a reality that forms our truth about an event, influencing our behaviour, attitudes and opinions.

But the media doesn’t present the truth. The media presents an interpretation of events. As Friedrich Nietzsche once quipped;

“It is precisely facts that do not exist, only interpretations”

Each journalist creating a story has an internal bias. They have a perspective on the world which affects how they interpret what they have seen. As Nietzsche said, there is no such thing as facts. Bias is sewn into every story we read or watch.

In turn, the news agency broadcasting or publishing a story will have an agenda. Each story helps reinforce this agenda. When reading or watching a news story, at face value you see or read the news. But thinking about how the story came to be, the story is an interpretation of an event based on someone’s perspective. This interpretation must support the underlying agenda of the news agency. There is so much more to the story then meets the eye.

When reading or watching the news it’s important not to take it at face value. Place an analytical lens on what you’re watching or reading. Ask yourself why. Why has the broadcaster/newspaper chosen this story over another? What purpose does it serve to present a certain news story? And why is the broadcaster/newspaper presenting the story in such a way? Because that’s what it is, a story forming a narrative about an event.

All news is fake news

The risk of Trump’s slogan fake news is he knows all too well how powerful the media is in shaping what people believe to be true. You need only look at Trump’s Presidential campaign, where voters were targeted with tailored messages to see this.

The slogan fake news is manipulative as it makes people question the merits of certain news stories. The risk Trump takes by questioning the validity of some news agencies is people may begin to question any news they see or read.

If you don’t question the news, you allow yourself to be moulded to support a certain agenda. If everyone started viewing all news as fake news, it would reduce the power of the media to cement beliefs into society.

Who knows, a positive of Trump’s administration might be that the slogan fake news is a masterstroke in doing the exact opposite of what was intended. By making people question all media, rather then the media Trump wants you to question. Now that would be powerful.