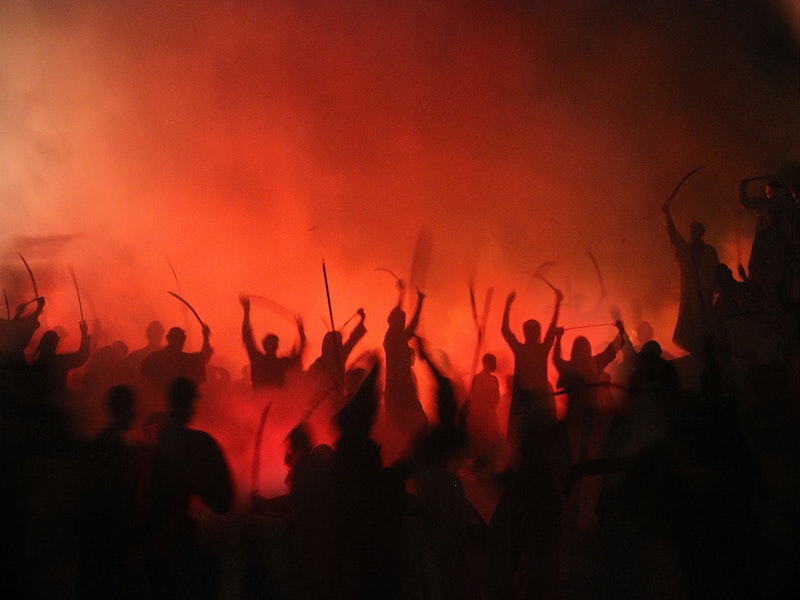 There is no more powerful expression of discontent against a regime than if a whole country rises in protest against the government. That’s exactly what’s happening in Belarus at present. Belarussians are protesting in their hundreds of thousands. Demanding Alexander Lukashenko step down from office. His reaction has been typical of authoritarian leaders in moments when their rule is under threat. Lukashenko has used the full force of the army and police in an attempt to quash unrest. The authorities have arrested opposition leaders and protestors. Many protestors have ‘disappeared’, and yet, the protests continue.

Time and time again, when the people protest against a corrupt government, the police and army defend the government against the people. It happens so often this goes unquestioned.

But this state of affairs makes no sense. The police force is an institution designed to uphold the law and protect society. The army is a force designed to protect a country in moments of conflict. Both are institutions whose remit is to protect the country, not necessarily the government.

The army and the police force should be politically impartial, independent institutions, detached from the government. Making sure the government is held as accountable as the people it governs.

What happens though if a government is threatening peoples liberties or human rights. Who is there to protect the people against a rogue regime?

The power of mass movements

The people have no institution on their side. What they do have is the greatest strength of all, power in numbers.

Protestors are always held up as unruly, disorderly mobs, seeking to riot or loot at any opportunity. But there is no greater symbol of unity between people then if everyone comes together to call for change in a mass movement. Nothing delegitimises a ruling regime more than when millions of people in a country demand change over days, weeks, or even months.

Ongoing protests in Hong Kong illustrate the power of a mass movement in calling for change. There seems no end in sight with China standing firm, and the people of Hong Kong unwilling to give in with their demands.

By defying those calls and going against the will of the people, China has revealed itself for what it is. An authoritarian government who rules with an iron fist.

More than that, the protests are a powerful symbol delegitimising Chinese rule in Hong Kong. Even if the Chinese get their way, it will be through coercive means.

Hong Kong wants democracy. By defying these calls China is going against the will of the people. Destroying any vial of legitimacy they once had in the country.

If the people have expressed dissatisfaction then the establishment should do their bidding. Isn’t government an expression of the will of the people? Of the people, by the people, for the people. Surely this feature of governance should lie at the heart of any ruling party. After all, what is a government without the support of the people?

When protestors are calling for an authoritarian government to step down, the army and police should act to support this process.

If a ruler continues to remain in power, against the will of the people, then the ruler becomes an authoritarian despot. And symbolises a threat to the nation. It is in these instances where the role of the army becomes so important.

The ultimate danger when there is a lack of detachment between an army and the ruling government is the government can corrupt the army and coerce them to carry out orders that may not be in the people’s interests.

This lack of detachment is dangerous because when protests against an authoritarian regime fail the backlash can be horrifying. The Iranian authorities brutally suppressed protests that exploded into life in November 2019.

Amnesty recently reported, “interrogators and prison officials perpetrated sexual violence against male detainees, including through stripping and forced nakedness…pepper spraying the genital area, and administering electric shocks to the testicles.”

The torture of prisoners didn’t stop there. One survivor described how;

“The electric shocks were the worst form of torture… It felt like my entire body was being pierced with millions of needles. If I refused to answer their questions, they would raise the voltage levels and give me stronger electric shocks. I would shake violently and there would be a strong burning sensation coursing through my whole body.”

The general population believes the purpose of an army is to defend a country against foreign invaders. This is only partly true because the greatest threat against any government is the very people they govern. It is the people themselves a government fears most. Because it is the people who are most likely to topple a regime.

The great irony of a police force or the army is their ultimate function is to protect the establishment and the status quo against internal threats.

Soldiers are trained to obey orders from superiors without question. That’s the fundamental remit of being in the army, do your duty without question. Otherwise, if soldiers do start questioning the regime they’ll betray their code of conduct. And treason is the ultimate betrayal of any soldier.

Soldiers have committed heinous acts against their people, against their brothers and sisters. All to protect regimes who, if the shoe was on the other foot, would see that soldier as the enemy.

Events in Belarus suggest Lukashenko’s regime doesn’t have the best interests of the people at heart. Otherwise, the people wouldn’t be protesting calling for him to step down.

Imagine Lukashenko’s regime (and countless other despots) focused on creating the best living conditions for their people. That way they could be confident the people won’t start an uprising against injustice.

Call me naive, but things aren’t that complicated when you break them down. Everyone has the same wants and needs. A government should focus on providing those wants and needs to make sure everyone in society has a decent standard of living. By doing so, you appease the people. Simple in theory. Much harder in practice when many regimes are more concerned with retaining power, then providing for the people they govern.

And things start to get complicated when you consider human emotions. When you place greed, corruption, envy, pride, jealously, ego, and a lust for power into the mix, you realise it’s our emotions that get the better of us. Governments aren’t passive non-emotional entities. They’re made up of people like you or me and have the same flaws and faults as regular people.

The thing that stands in the way of the simple desire to make society a better place is people themselves. If governments always had the interests of their people at heart, the question you need to ask yourself is, would there be any need for an army at all?

Will Your Life Improve Under a New President?

The Republicans and Democrats represent different sides of the same coin. What America needs is a new coin

Why Brexit Has Always Been About Dividing Society