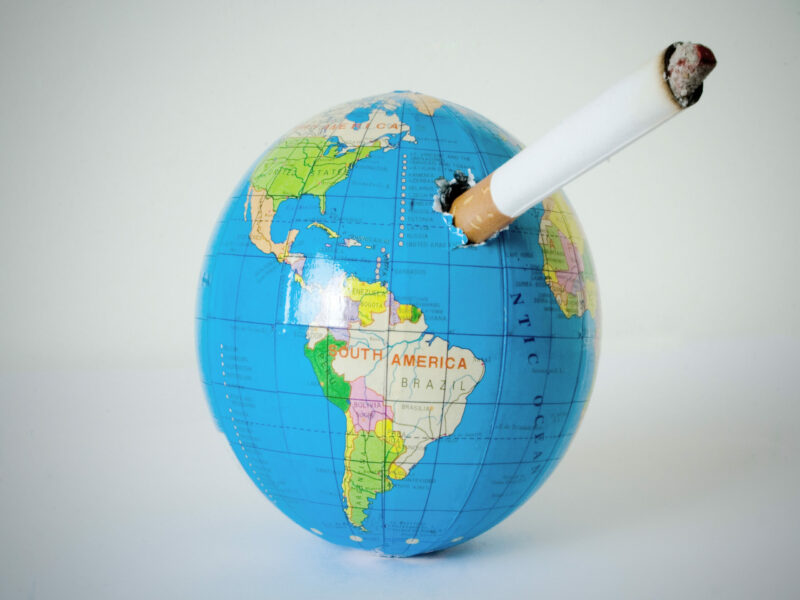 The climate crisis is the greatest challenge humanity has ever faced. It doesn’t get any more serious than this. But, day to day does it feel like we’re faced with a crisis? Not really. As an individual, you can go about your life pretty much as you’ve always done. Blissfully unaware your actions are contributing to the collapse of civilisation. The issue is that our incentives don’t encourage changes in our behaviour. So, what can we do to encourage people to change?

People’s behaviour changed through the use of incentives.

The moral incentive encouraging smokers to stop has been well known for decades. Smoking’s terrible for your health. A smoker is 15 to 30 times more likely to either contract lung cancer or die from it than non-smokers. Advertising campaigns using shock tactics to communicate how bad smoking is have done a great job to reinforce its effects on health.

There was a time when smoking was considered good for you, and the act of smoking was integrated into everyday society. It was the norm, and laws made it easy to smoke. It’s incredible to think there was a time you could smoke on planes. We’ve come a long way since then.

Smokers are now given designated areas to smoke. You’re labeled as and feel like a ‘smoker’. An outsider, different from the rest. The convenience of smoking has now turned into an inconvenience. In shops and supermarkets, cigarettes are hidden out of sight, adding to the stigma associated with smoking.

Then there’s the financial incentive. Government tax on cigarettes is high, making cigarettes an expensive habit worth giving up. An average pack of cigarettes is £8 ($10.40), 80% of which is tax.

A combination of the three incentives has had a dramatic impact on the number of smokers in the UK. But the change could only happen with government intervention. Policies to stop people smoking have been central in driving behavioural change.

The climate crisis ain’t a cigarette

With smoking, there’s always been a clear aim, encourage people to stop smoking. Success is easily measured by how many people smoke now compared to before. Making it easier to design policies leading to the desired shift in behaviour.

The climate crisis is in a league of its own when it comes to the challenges it presents. It affects everyone and everything. To make matters worse, it’s not even a problem. Its an effect of one. The cause is how our economy is structured. So it goes without saying we should be placing a lens on our economy, and how it influences society.

Growth lies at the heart of our economy and consumption is the fuel keeping the growth machine churning. We’re encouraged to buy things again, and again, and again. There’s a reason we’re bombarded by around 5000 advertisements a day. Our function’s to consume. That’s how we positively contribute to the economy.

Our current way of doing things is unsustainable due to the increasing pressure placed on the natural world. One of the ill effects is, of course, the climate crisis. But it’s not the only impact we’re having on the environment. Other species of life are going extinct, we’re destroying habitat animals depend on and we’re also making the oceans more acidic. Things need to change.

How we do things can’t continue forever, and yet there’s no sign of the growth machine slowing down. We’re still chewing through the natural world at an alarming rate.

Most governments are cheerleaders for growth. It’s difficult to imagine the introduction of policies discouraging society to consume less. Consumption is behaviour lying at the very heart of how we do things. If you change that, well, you change everything.

It’s not a priority

There’s no incentive for Governments to incentivise people to change. Groups such as Extinction Rebellion call for governments to take action. But these calls are still coming from a minority.

There’s no urgency because the effects of the climate crisis are slow. Hearing how climate change will have debilitating impacts in 2100 doesn’t evoke feelings of impending danger.

The threat doesn’t feel like a threat, and people’s behaviour reflects this. You can be sure if a war broke out, people would prioritise their safety. When there’s an impending danger to your life, you react accordingly. The climate crisis doesn’t evoke the same reaction because there’s no immediate danger.

People focus on their problems, rather than the problem because the problem of climate change doesn’t impact them on a daily basis.

What change is good change?

Drawdown: The Most Comprehensive Plan Ever Proposed To Reverse Global Warming provides 100 solutions to the climate crisis. The book focuses on ways we can look to reduce and even reverse carbon emissions in the atmosphere in the next 30 years. This could act as a blueprint to help develop policies leading to a low carbon future.

With so many vices encouraging us to behave in ways creating negative impacts, following a guide of 100 things to do would be difficult. That’s where governments can be useful. We know how we can limit our impacts. What’s required is the will and motivation for governments to act on the information available to them.

The elephant in the room here is the people and companies benefitting from our current way of doing things. Their wealth and power come from the current structure. How do government policies encouraging people to change their behaviour benefit them? Vested interests want more of the same, not wholesale change.

Whether consumption is a problem all depends on your perspective. Governments incentivising individuals to stop consuming so much is a risk to corporations’ profit margins. From their perspective, an unthinkable thought.

Let’s forget about obstacles to change for a moment and think about transformative policies governments could introduce.

There’s a growing sentiment that a Universal Basic Income (UBI) could help solve systemic societal issues. The idea of a UBI is that every person in a country gets a basic income paid for by the government. Evidence of the social benefits of a UBI is strong, but it could also be used to help incentivise changes in behaviour.

Let’s imagine everyone in the U.K (where I’m from) gets paid a UBI of £1000 ($1300) per month. The payment isn’t fixed and can increase or decrease depending on your choices.

To give an example, going vegan is one of the most impactful things you can do to limit your carbon footprint. A reward-based UBI would reward a vegan with a further payment of £200 ($260) for this positive behaviour. Making a total of £1200 ($1560) for the month.

The greater the impact the positive behaviour has, the higher the payment, and vice versa.

There would be a strong financial incentive encouraging people to change their eating habits. But where this could be truly transformative is the social incentive. It’s clear from the cost to your UBI that eating meat is undesirable behaviour. It would become a faux pas to order meat in a restaurant.

Then there’s the moral incentive. If everyone is trying their best to change their behaviour for the greater good, your decision comes across as selfish to the point of ostracising you from society.

Eating meat would become stigmatized as much as smoking is now. But that’s what’s needed. This may sound extreme, but desperate times call for different ideas.

The power of a reward-based UBI is that it blends the moral, social and financial incentives. Making it easier for people to associate their behaviourial choices with the impacts. The higher the penalty for a life choice, the greater the impact on the natural world.

A reward-based UBI aligned to the carbon intensity of your behaviour would also make the climate crisis an intrinsic part of everyday life. People would be talking and thinking about it. Again, this is essential in bringing about desired behavioural changes. You couldn’t not think about the climate crisis.

The elephant in the room

A reward-based UBI is far removed from our current way of doing things. But we need transformative ideas to encourage individuals to change their behaviour. People aren’t going to do this by themselves. Like smoking, people need incentives to change.

The bitter reality we face is that vested interests in our current way of doing things don’t want anything to change. The establishment controls the levers of power so it would be unrealistic to think they would choose to introduce radical social change. Nothing highlights the challenge we face more than this conflict of interest.

The establishment doesn’t seem to recognise its the structure of our economy and society that’s leading to societal breakdown. An example of this is fossil fuel companies are still heavily subsidised by governments. The US government gives $20 billion per year to the coal, natural gas and crude oil industry’s. EU subsidies are estimated at a staggering €55 billion. Governments fund fossil fuel companies with taxpayers’ money.

We’re funding our own demise.

The challenge we face is that transformation is going to happen. We must transform before the environment around us forces us to transform. If we don’t the futures not worth thinking about.

Are Cryptocurrencies Taking us One Step Closer to a Neoliberal Dreamland?

Decentralised currencies are being celebrated as a game-changer, but placing so much faith in the market is dangerous

Why Do Corporations Play By Rules That Leave Society Worse Off?